This is my spine. Wicked cool, eh?

Curse your sudden but inevitable betrayal. 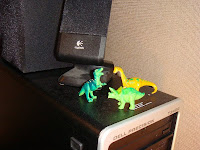 I'm so cool now, I have Dinos on my computer. I feel a bit like Wash, though I do not play with them. I'm not THAT big a geek, come on! 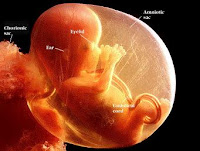 Folks, we're at 16 weeks of pregnancy and this is way cool. To the left is an approximate image of what the bambino looks like now. According to the Internets: "Fetus is five and a half inches tall and only six ounces in weight, eyebrows, eyelashes and fine hair appear. The child can grasp with his hands, kick, or even somersault." This week I began to feel the results of the above described movement. It was kind of tickly and fluttery, very light, but definitely something is moving around in there. I can't wait to feel a really strong kick...though it will probably only happen at night when I want to sleep! VERY soon we will be finding out the gender! I have an appoinment at Fetal Fotos next Tuesday and hopefully they'll be able to tell me WHAT IT IS! So far, I have had a very easy pregnancy, which is awesome. The worst thing (aside from having to quit the Chardonnay) is how much weight I have gained. I am eating totally healthy, resisting the sweet things that sound so good right now, and sticking to 'good for me' stuff...but still the weight continues to build, and not just in the belly. If you need me this weekend, I'll be shopping for some more maternity clothes, so I don't have to wear the same shirt every other day.
Posted by moneek at 10:46 AM 2 comments:

There's this guy who I work with, whose office is not far from my 'area' and he is freaking annoying. All morning he has been whistling. Tuneless, loud, incessant. I want to stab him with an x-acto knife.
Posted by moneek at 10:48 AM 2 comments:

My BGF (Best Guy Friend) Travis sent me this the other day to help me prepare for caring for an infant. It was so helpful that I thought I'd pass it along...(click to enlarge).